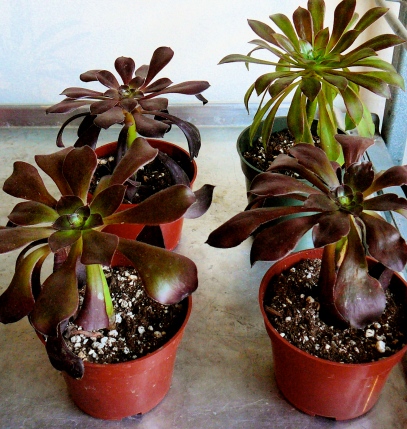 The Aeonium is a showy succulent that forms leaves which emerge in rosette formations.  As an Aeonium grows it branches out, its lower leaves drop and the plant as a whole begins to resemble a dark purple rubber rose bush with long stems.

The Aeonium prefers as much sun as possible.  They will grow in shade or diffused light, but won’t have quite as full and showy rosettes.  Therefore, keep it in as sunny as a spot as possible

Contrary to popular belief, the Aeonium grows best when it is watered regularly.  Most often when an Aeonium gets that dry shriveled look sometimes seen on their leaves, it is due to too over-dry of conditions.  Do not let the soil dry out completely, but allow it to thoroughly dry 1-2 inches into the soil before watering again.

The roots are wimpy.  For the great size that this beautiful plant can grow to, it is surprising how minute its root ball is.  Water is stored in the leaves and branches – think of this when watering the Aeonium… every week or so, give it just enough water for those few roots to catch the moisture and replenish its foliage